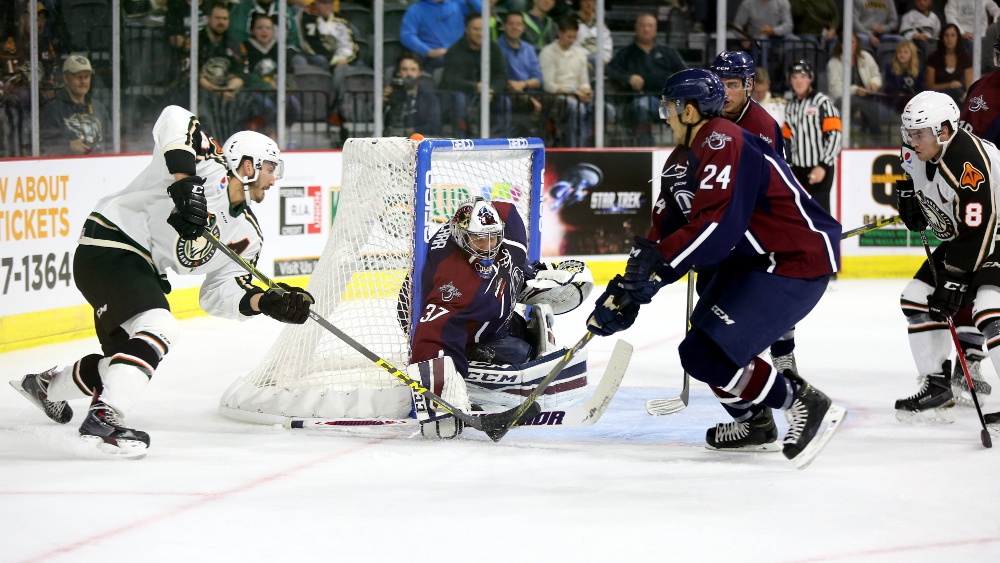 Tulsa goalie Kevin Carr hugs his post as Quad City forward Matt Neal tries to shoot from the side of the net. (photo credit: Mallards Media Relations)
MOLINE, IL – It is easy to understand why Oilers’ goalie Kevin Carr calls the iWireless Center one of his favorite rinks in the ECHL.  The second-year pro recorded an 18-save shutout in a 1-0 Tulsa victory over the Quad City Mallards on Friday night to improve to 4-0-2 in his last six starts at the iWireless Center.  Two of Carr’s four career shutouts have been earned in the Mallards’ barn and on Friday, Carr’s puck-stopping ability, combined with a power play tally from Brandon Wong in the second period, was enough to give the Oilers’ their first road win of the season.
The first period was void of any scoring but was defined by heavy hits and a combative attitude from both sides.  Tulsa winger Brady Ramsay traded punches with Quad City defenseman Austin Coldwell at 6:53 for the Oilers’ first fight of the season.  At the 12:36 mark, Oilers’ center Ben Walker was sent face first into the boards by Mallards forward Ryan Tesink and the ensuing unpleasantries led to a bout between Tulsa’s Brian Nugent and Quad City’s Jake Baker.  Tesink was given a five-minute major for boarding but the Oilers were unable to cash in on the lengthy power play opportunity.
The Oilers were held without a power play tally through the first three contests of the season, but after Quad City defenseman Alex Gudbranson was whistled for cross-checking at 5:39 of the second period, Tulsa’s drought came to an end.  Center Brandon Wong slipped a shot from the slot under the pad of Mallards’ goalie Steve Michalek at 6:38 for his second goal of the season and second strike in as many games.  Dennis Brown, a defenseman recently acquired in a trade from the Manchester Monarchs, assisted on Wong’s goal for his first point in his first appearance as an Oiler.
In the final frame, the Oilers held the Mallards to just five shots on net.  Tulsa killed off a Matt Konan holding minor early in the period and finished the evening 4-for-4 on the penalty kill.  The Oilers have now successfully killed off 17 of the 18 opposing power plays they faced this season.  Dating back to last season, Carr has a .966 save-percentage in his last six appearances in Quad City and he improved his record to 1-1-0 for the 2015-16 campaign.
The Oilers, winners of two straight games, will complete their weekend with another tilt against the Mallards at 7:05 p.m. on Saturday night.
Final Box
Find the best Things To Do in Tulsa