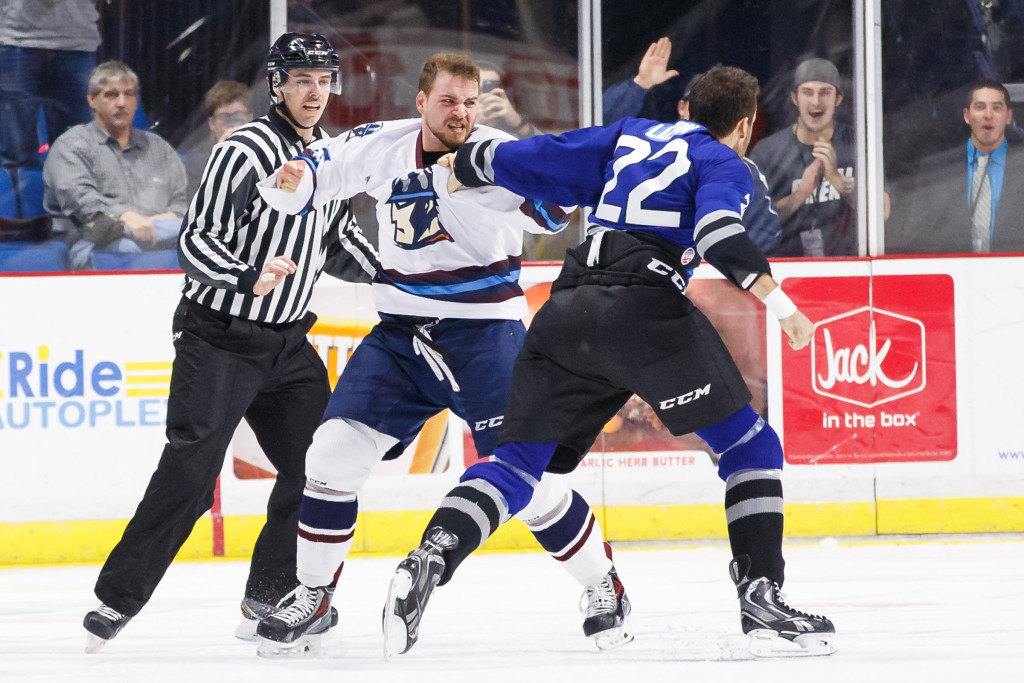 Tulsa’s Mathieu Gagnon slugs it out with Wichita’s Erick Lizon during the first period of Friday’s tilt at the BOK Center. (photo by: Kevin Pyle – www.photopyle.com)

TULSA, OK – The Tulsa Oilers began a stretch of three games in three days with a 2-0 victory over the Wichita Thunder on Friday night in front of 4,933 at the BOK Center.  Tulsa goaltender Kevin Carr posted his second shutout of the season, and fifth of his career, with a 24-save performance.  Rookie defenseman Justin Mansfield notched his first professional goal as the Oilers earned their first win of the season over the Thunder and moved past Wichita for sole possession of third place in the Central Division.

After a memorable bout between Mathieu Gagnon and Erick Lizon in Wichita on November 11, a rematch between the two heavyweights seemed imminent on Friday.  Seven minutes into the opening period, the two enforcers didn’t disappoint with a spirited contest that was applauded by the BOK Center crowd.  Four minutes after the fight, Mansfield rocketed a high-slot wrist shot over the glove of Wichita goalie David Shantz to break the scoreless draw.  Mansfield, who was re-signed by the Oilers last week, scored his first goal in the 17th game of his young career.

Wichita seized momentum in the second period and peppered Carr with 16 shots in the frame, but the Tulsa netminder remained steady and made his most spectacular stop of the night with a brilliant toe save on a Thunder power play.  Carr and the Oilers maintained a 1-0 edge heading into the third period.

Oilers’ forward Phil Brewer was denied on a shorthanded breakaway in the first period, but at the 11:36 mark of the third, the rookie redeemed himself to give the home side a two-goal cushion.  Center Dan DeSalvo floated a pass across the slot where Brewer was waiting to snap a shot over a sprawling Shantz for his fifth tally of the season.  Brewer, who like Mansfield, joined the Oilers as an amateur at the end of last season, tied Emerson Clark for the team lead with five goals and provided Carr with more than enough breathing room to finish the job.

Tulsa ran its record to 6-7-1-1 overall while Wichita dropped its sixth consecutive road game and suffered its fifth loss in the last six outings.  The long-time rivals will matchup again on Saturday night at 7:05 p.m. at Intrust Bank Arena in the fourth meeting of the StoneWolf Casino Cup series.

Kept in, here’s a shot toward the goal, save, rebound, knocked away to the near side. Clark gets it again for the Oilers, he will clear it out this time.

Back come the Oilers, Brewer. Brewer over the blue line, sends it over on the left side in the corner. The Americans get it once again. Now Gunn, Mike Gunn sends it ahead. He gets it back on the give and go, Gunn’s over the red line, into the blue line. Into the Tulsa end goes Gunn in the corner, he has it slapped away by Lutz to the near side, but not out.

Kept in at the point by the Americans. Now around to the far side, up to the point, here’s a shot, kick save, off the stick of Poe, kick save by Kevin Carr, and the Americans still have control of the puck in the Tulsa zone.

Costello comes in to help out. Costello with it, out to the point to Poe. He keeps it in there, now down low. Into the corner to King, and around to the far side, Descoteaux. Descoteaux with the puck, he has it poke checked away, the Oilers recover, and bring it out of the zone.

Slap it ahead into the Allen end, and Tulsa’s going to make a change. They’ve been playing a lot of defense in their own zone there have the Oilers. Couldn’t seem to get the puck out of their zone. The puck gets deflected off a stick into the mesh.

Now, in the 2nd period, Allen with four, Tulsa with one. In the game so far, Allen, 12, Tulsa, 11 shots on goal. I did want to double check that because I knew that there was some discrepancy on the shots on goal in that 1st period there.

All right. I’ve been fooling around with the equipment here trying to figure out what was the problem with the crowd mic. I just figured it out. The game somehow got bumped down to nothing, so there was hardly any crowd mic, and I couldn’t figure it out.

We’re back to the action here. Shot on goal, Kevin Carr sprawling on the ice, and he makes the save on his stomach there. Sprawling almost like Eddie the Eagle. Remember Eddie the Eagle? They’re making a movie about him. That’ll be interesting to see. I’m looking forward to seeing that one. There hasn’t been a decent hockey movie out for a long time. Lot of baseball movies, but not a whole lot of hockey movies out in many years. Lot off football movies too, come to think of it lately. Lot of high school football getting a lot of attention. High school and college football-type movies.

Puck in the neutral zone, Oilers get it there. Backing up in his own end to set the play is Aaron Harstad. Now over on the left side to Nugent, off his stick into the Americans’ zone, and it’s going to be an icing against the Oilers.

11:43 left to go 2nd period. 1-0 Americans with the lead. Face-off to the right of the goaltender in the Tulsa zone. Oilers win the draw. It goes behind the goal there for Harstad. He sends it up to the blue line, but it’s kept in by King of the Americans. Now picked up by Brown.