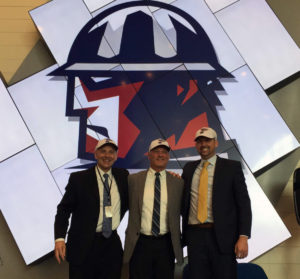 Strong relationships can go a long way towards success in both life and business.

Hockey is no different.

First-year Tulsa Oilers head coach Rob Murray is no stranger to the club’s new National Hockey League affiliate, the St. Louis Blues. That relationship has paid dividends earlier in Murray’s coaching career, and he hopes that will continue into the future.

“[The affiliation] is good for us in many ways,” said Murray. “The Blues have been competitive in the playoffs for many years, which is terrific for the fans.” St. Louis has not missed the playoffs since 2010-11.

“Many [Oilers fans] have been Blues fans for some time. The connection with St. Louis and Oilers great Garry Unger is so good from a history standpoint with so many connecting dots. The ability for ours fans to really have an NHL team to latch on to and support along with us is fantastic,”

The courtship with St. Louis began even before Murray was officially named Tulsa’s Head Coach on June 7.

“I reached out to the Blues before it was even announced that I would be the new coach,” added Murray. “I knew that former Oilers Head Coach Jason Christie had a relationship with Winnipeg, and there was a good chance that Tulsa would need a new affiliate. It is not something that is done overnight, but not something that is that complicated either.”

Murray’s close relationship throughout his playing and coaching career with Blues Assistant General Manager Kevin McDonald was a natural starting point. From a geography and player personnel perspective, it was clear St. Louis was the right choice.

“Rob did all of the work and his relationship with St. Louis is the biggest reason this happened,” said Oilers General Manager Taylor Hall. “It’s important to be able to jump in a car and see your parent club play and vice versa. This is the best scenario we’ve had in a long time, probably ever, to be affiliated with the Blues. We are thrilled.”

St. Louis puts a lot of hours, resources and commitment behind player development. When Murray was coaching the Alaska Aces, who were affiliated with the Blues multiple times during his tenure, Director of Player Development Tim Taylor visited for over a week, got on the ice and assisted with practice. Goaltending coaches came and stayed for extended periods of time for instruction.  That is a testament to the Blues’ belief in Murray and the support the Oilers can expect throughout the upcoming season.

When it comes to ECHL rosters, parent clubs can play a big role or a very small one. It remains to be seen how many Blues prospects will land on Tulsa’s opening night roster. St. Louis does not have an official American Hockey League affiliate in 2017-18, but will share some players with San Antonio and Chicago. That could benefit Tulsa and increase the possibility of seeing high-level prospects at the BOK Center.

For Murray, who does most of recruiting, familiarity has its advantages:

“It is really hard to project who is going to be in Tulsa just yet. Time will tell, but I have high hopes for the type of player that we will have the chance to add at the beginning of the season and throughout the year.”

The trust that the Blues organization has in Murray is a huge factor. He will lead the Blues rookies in an eight-team NHL Showcase in Traverse City, Michigan September 8-12 and follow that up with a trip to St. Louis’ training camp. These opportunities will give Murray a close look at prospects and other invitees that could help fill out his roster this season.

“The kind of access that Rob will have is invaluable and very important,” said Hall. He will be able to build relationships with those kids. Not everyone will sign with St. Louis. It really gives him a chance to do some recruiting of top-end prospects that may just be a step away from signing an NHL or AHL contract.”

The Blues—Murray connection is very strong, meaning the Blues—Oilers partnership should provide continuous opportunities leading to a bright future ahead.