Three straight goals by Tulsa in the middle period, empty netter late lead banged up Oilers to 4-2 win in Texas.

ALLEN, TX – A strong second period sparked the Tulsa Oilers to a 4-2 win Friday against the Allen Americans at Allen Event Center in the fourth of 14 meetings between the two teams. 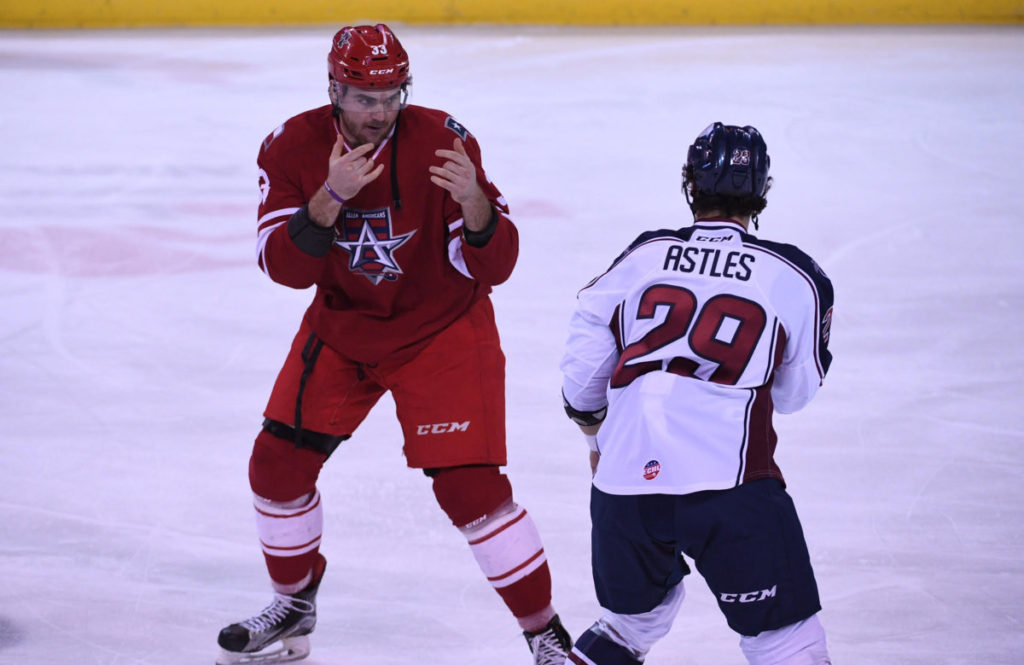 The Americans outshot the Oilers 13-1 in the first 12 minutes of play, but Tulsa goaltender Jamie Phillips kept the puck out of the net during that stretch. Allen broke the scoreless tie on a late power play, when Spencer Asuchak put away a centering pass from low in the right circle.

Ben Murphy fired a wrist shot over Allen goaltender Riley Gill’s blocker 1:52 into the second period to tie the game at 1-1. Tulsa took its first lead, when Russian forward Dmitri Ognev stole the puck away from an Allen defender and snapped a shot into the top corner of the net. The Oilers made it 3-1, when Chris Joyaux scored his first career goal 1:07 after Ognev’s goal. But the Americans would add their second power play goal, off the stick of Chad Costello to cut the Oilers lead to 3-2 after two.

Tulsa killed off two more Allen power plays in the third period and four of six for the game, while Danick Gauthier added an empty-net power play goal in the waning seconds to seal the 4-2 win. Phillips stopped 30 Americans shots for his 14th win of the season.

The Oilers and Americans meet again Saturday night at the Allen Event Center at 7:05pm in what will be the fifth of 14 meetings this season. Catch the action on www.tulsaoilers.com, by clicking on “Listen Live”, or watch the game on ECHL.TV. Coverage starts at 6:50. Tulsa then returns home to host the Missouri Mavericks on Friday, December 9th at 7:05pm at the BOK Center for the team’s annual Teddy Bear Toss.