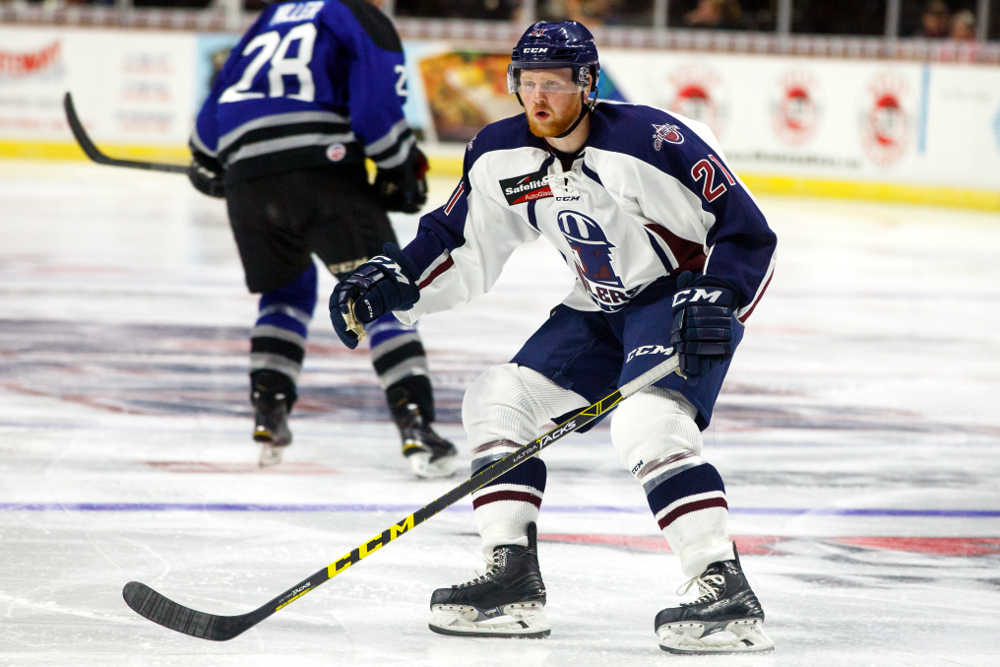 TULSA, OK – The Tulsa Oilers announced on Wednesday that center Ben Walker has been recalled by their AHL affiliate, the Manitoba Moose.

Walker, 22, recorded three points (1 goal, 2 assists) in seven appearances for the Oilers this season.  The Edina, Minnesota native scored Tulsa’s first goal of the season against Wichita on October 16 and posted the first multi-point game of his career with two assists in a 4-3 shootout victory over Missouri on October 30.

Walker, who participated in training camp with Manitoba, is the first Oilers’ player called up to the AHL this season.  He will join the Moose in North Carolina as they prepare to face off against the Charlotte Checkers on Saturday, November 7 and Sunday, November 8.

The Oilers return to action on Friday, November 6 in Loveland, Colorado for the first game in a two-game weekend series with the Colorado Eagles.  Both games are slated for 8:05 p.m. Central Time.

The Tulsa Oilers have an opportunity to catch up with this. We’ve got a penalty coming up, and this is going to go against Tulsa. Gagnon’s going to get called for hooking. I saw that one. Can’t hardly get away with that one.

Mathieu Gagnon will get called with 2:00 for hooking with just 2:04 left to play here in this one in the regulation, and that means it’ll be a Rusty Roberts Bail Bonds penalty kill for the Oilers here in the final 2:04 of this 3rd period. Gagnon in the penalty box, 2:00 for hooking, and it’ll be the 5th power play opportunity of the night for the Allen Americans with 2:04 remaining in this 3rd period of hockey.

Face-off in the Tulsa end, it comes out to the point. Kept in by Makowski, now to Parker, cross-rink pass to the far side, Gens. Gens with it on the far side in the corner. Comes out to the circle, up to the top of the slot, a shot, tipped in the air, and it doesn’t go. Stop, save, and it’s now stopped by Carr. Oh my.

A lot of poking at that puck. Boy, the first shot got tipped up in the air above the head of Carr. Then it came back down and a couple of players slapping at it, but Carr was able to smother it, so we’ll get a face-off now in the Tulsa end.

1:46 remaining in the period, 1:43 left in the power play for the Americans. Allen with the puck in the Tulsa end. They work it up to the point, now across to the right side to Roy. Excuse me, and that’s not Roy. That would be Makowski. Now Makowski can’t keep it in at the blue line, they’ll have to reset.

Parker gets it in the neutral zone, drops it off to Makowski in his own end. 1:23 left to go in this one. The Americans have pulled their goaltender. He’s gone to the bench.

Empty net, intercepted, shot, and a goal! Count it good! Brady Ramsay intercepted the pass at the blue line, turned it around, and put it in the empty netter. Count it good for Brady Ramsay with 1:17 left to go, a shorthanded goal, and the insurance goal for this one here in the 3rd period. It makes it a 3-1 lead for the Oilers. Oh yeah, nice play by Ramsay. Got to love it.

All right. Now we’ve got, still, to kill this penalty, and the empty net is still empty there at the end of the rink for the Americans. They have the puck in the Tulsa zone. 1:00 remaining in the 3rd period. Up to the top, and it goes through the skate of Makowski. He loses it back in his own zone. After it is Brewer, he’s racing Makowski. Makowski gets to it first to Steffes. Now they clear it out in the neutral zone.

40 seconds left to play, 3rd period, Tulsa with a 3-1 lead. Puck goes behind the goal in the Tulsa end. Steffes gets it for the Americans. Now to Costello, up to the left point, a shot toward the goal by Pinkston. It gets deflected wide of the goal.

Down to 25 seconds. I’m watching the clock. It can’t go any faster. Man, I wish it would. Now in front, a shot by Parker, sticked away by Carr, and it’s cleared out by the Oilers, all the way back into the Allen end. It will not go in the goal. It was wide.

Ten seconds left to go in this one, fans, Pinkston ahead to Crane. Over the blue line they come. Now in front, Tulsa’s back to full strength with two seconds, and that’ll be it. Carr stops the puck, and the horn sounds, ending this one, and you can count it good for the Tulsa Oilers tonight. They win it 3-1 here in Allen. Yeah! Wow.

What a great job by the Tulsa Oilers. Came out a little flat early on in the 1st period, gave up a shorthanded goal, but boy, I’ll tell you, the Oilers never quit, they battled back, and looked good the rest of the way. They come away with a victory here tonight on the Allen Americans’ home ice. Got to love that.

Here’s the scoring in this game. 5:37 of the 1st period, Dyson Stevenson scored his 3rd of the season for Allen, assisted by Steffes on the shorthanded goal. That gave them a 1-0 lead.

Then in the 2nd period, Tulsa scoring at 16:38 of the period. Emerson Clark with his 10th of the year, assisted by Brewer and DeSalvo. That was a power play goal tying the game at one.

In the 3rd period, Tulsa took the lead as Adam Pleskach stole the puck away along the boards on the far side, and he … Hang on, folks. I’m watching something I need to write a note about here. Okay. All right. Sorry, there was a few players … Down at center ice for a prayer following the game, and I wanted to make a note of that.

Adam Pleskach stole the puck along the boards on the far side in the 3rd period at 6:55 of the period, and he took it in on goal all by himself, and scored the goal. What a great play by Pleskach. His 7th of this season. That gave Tulsa a 2-1 lead, and then of course, there late in the game, Brady Ramsay with his 5th goal of the season, as he intercepted the puck on the shorthanded end. It was an empty netter, he intercepted the puck there at the blue line, turned around, put it into the empty net, and the Oilers win it tonight on the final score of 3-1, Tulsa with the victory.

Shots on goal in the game, Tulsa with 26, Allen with 20 total shots on goal here in this game tonight.

Tulsa was 1-for-6 on the power play. Allen, 0-for-5 in power play opportunities this evening.

We will be off for the next four days. It’ll be a little bit of a break, Christmas break here in the East Coast Hockey League, and then we’ll be back in action on Saturday up in Wichita, as the Oilers take on the Wichita Thunder. That’ll be coming up this Saturday, the 26th, 7:05 face-off in Wichita, so we hope you join us for that one.

Once again, our final score, Tulsa wins it here tonight, 3-1. Count it good for the Oilers! Jeff Brucculeri saying so long, have a great evening, and Merry Christmas, everybody!