April brings new life for some teams and an unwanted rest for others. The 2022 Kelly Cup Playoffs are a blink away and the Tulsa Oilers have qualified for the first time since the 2018-19 season, a season in which they made a Western Conference Final run, falling in game seven to the Toledo Walleye.

Tulsa enters the playoffs in a different position than it did four seasons ago. Tulsa won the Mountain division in 2018-19, compiling 90 points with a record of 42-24-4-2, acquiring at least 20 home wins and 20 road wins in the process. This year they have to face the Mountain division champions in the likes of the Utah Grizzlies. As the fourth and final seed in the Mountain division the Oilers will start their campaign for the Cup on the road in West Valley City, Utah on Friday, April 22.

Many factors play into a successful season, whether you win the Brabham Cup as the best regular-season team, or if you take the final spot in the playoffs. We will look at a few categories that the Oilers have improved in during the course of the regular season in comparison to last year, a year in which the Oilers missed the playoffs.

It is important to have a healthy distribution of scoring among skaters in order to win consistently. It also tends to be a trend of teams that make deep playoff runs. A top-heavy team can become too streaky when riding on the success of just a single line or a few individuals.

The Oilers have made major strides in scoring distribution this season compared to last. We will look at three key factors that factor in this evaluation; (1) the number of individuals that acquired 20 or more points, (2) 20 or more assists, (3) and 10 or more goals. We will look at all players who played in at least one game for the Oilers, both this season and last. These categories will help us see how serviceable the team was in regards to scoring compared to last year.

Below is a visual representation of the number of players who qualified for these accomplishments last year and this year (some players qualified for multiple categories). 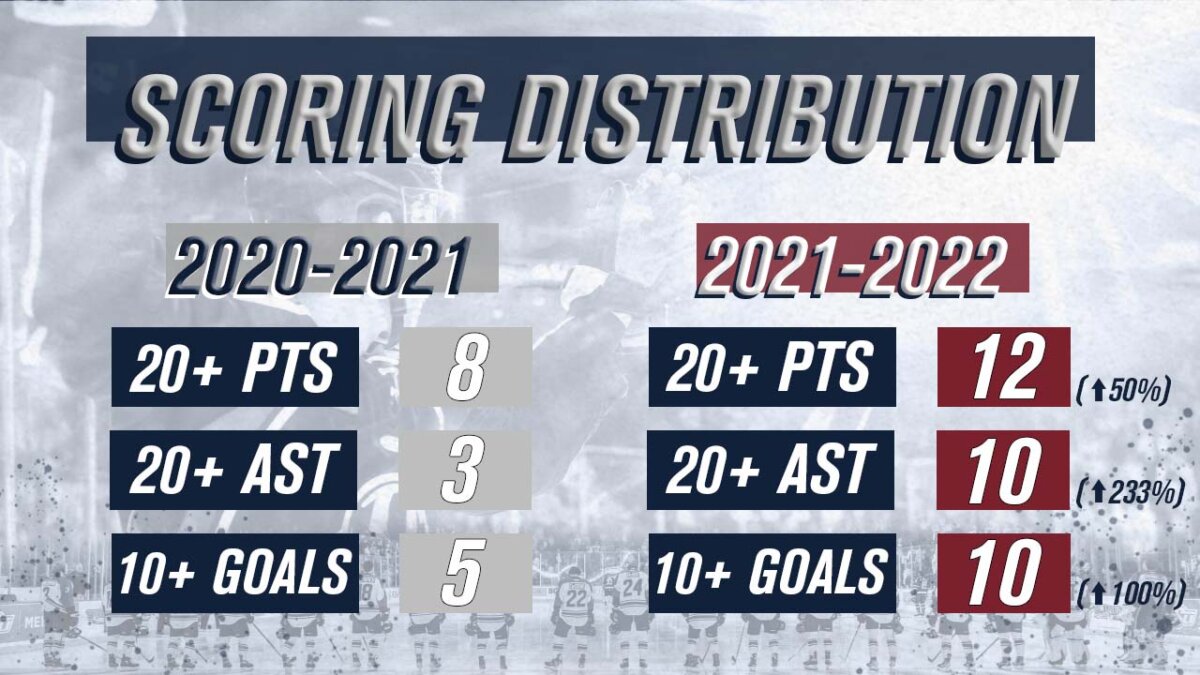 The Oilers had a more productive lineup, increasing the number of players who qualified for each of the above categories, allowing for a more diverse scoring threat. This led to averaging 3.05 goals-per-game this year, compared to last year’s 2.5 goals per game (^22%). The Oilers ultimately doubled the number of total players qualifying in any of the three categories shown in graphic 1.1, from last season to this season.

Where is this newfound production coming from? Who is carrying the weight? The ECHL has quite a bit of roster turnover; we will need to look at the average impact of all skaters combined to get a look at what the Oilers as a whole did this season.

An important adjustment to the way we look at these numbers is to account for man-games played (MGP). This takes into account all the games played by each player in order to look at a true average of impact on the ice as a team. When accounting for the number of games all players participated in combined, we see a more impactful increase in scoring among the average individual. All Tulsa skaters averaged 0.382 points-per-game last season. In comparison, all Tulsa forwards averaged .520 points-per-game this season (36%^).

Last season’s Oilers forwards averaged 0.430 points per game, to this year’s 0.645 points per game (^50%). In 2020-21, Tulsa’s defensemen averaged 0.294 points per game compared to a 0.310 points-per-game average in 2021-22 (^28%). This shows a productive leap when evaluating all players who had a chance to make an impact in the lineup. You may be seeing a trend. The trend is that it cannot be denied how much the forward group has improved and made the largest impact in advancing the scoring distribution for the team, not in comparison to defensemen but in comparison to the previous season’s forward group.

Some Looks at the ‘Rooks

Rookies…an enigma to say the least. At times the most electrifying piece to the puzzle and at other times, more experience and time is needed in order to blossom. 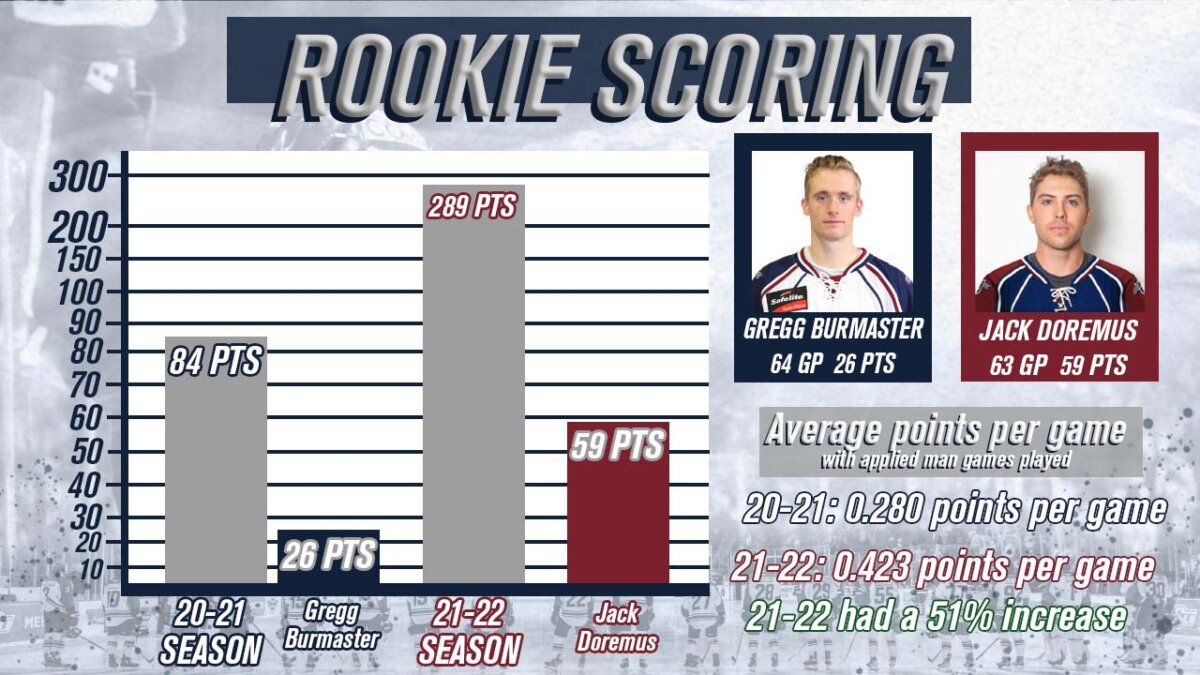 Rookies were relied upon much more this season, and they earned that trust. This season’s rookies had 383 more man-games played than last year. This jump in production was led by none-other than Jack Doremus. Doremus snagged 59 total points, leading all rookies and players as a whole for the Oilers this season. This was 70 percent of what all Oilers’ rookies produced combined just one season ago. Doremus will be a major factor in the first round of the playoffs and his scoring touch will need to be on display.

What Utah has to Bear

The forwards stepped up and the rookies shined bright. The scoring distribution took leaping strides and it all led to an Oilers’ playoff berth. But what will happen next? The first-seed Utah Grizzlies and the fourth-seed Oilers faced each other eight times in the regular season, what did we see? Tulsa went 4-4-0-0 (eight points) in those eight games while Utah went 4-3-1-0 (nine points) in that span. The Oilers outscored Utah 28-26 in the season series, while outshooting the Grizzlies in six of those games (23% more shots overall). Although the Oilers outscored and outshot the Grizzlies, Utah was a bit more opportunistic. Utah had a team shooting percentage of 11.5 percent while Tulsa finished at 10 percent. A close comparison shows just how tight this series has the potential of being.

An X-factor in this series could be the performance of goaltender Daniel Mannella. Mannella played in just four of the eight games versus Utah, but in that span he did not perform to his average. Mannella had a 3.52 GAA and an 0.879 SV% against Utah. Mannella played in more games than any goaltenderin the league with 51,finishing the season with a 2.60 GAA and a 0.907 SV% along with a league-leading 29 wins. Given the rest he will have entering the playoffs, Mannella can be a real force for Tulsa, but this Utah team has a bit of firepower.

Some Grizzlies to watch for in the series will be Mason Mannek and Charle-Edouard D’Astous. Mannek performed exceptionally well against Tulsa, collecting nine points in eight games. Mirroring that exact stat line was Doremus against Utah. Those two top-scoring forwards will be fun to watch against one another as they can keep pace with the best. The addition of Charle-Edouard D’Astous creates maybe the biggest threat for Utah. D’Astous led all defensemen in the league in goals with 26, nine being power-play goals. He was awarded the “Defenseman of the Year” award for 2021-22 and will be a threat offensively and defensively.

Utah will have to work extremely hard to find the answer for two players in maroon and navy. Utah must find a way to solve Joe Garreffa and Max Golod and their ability to transition the puck up ice. It is no easy task because Garreffa and Golod are among the best forwards in the league in regards to their skill and speed combination in the transition game. Garreffa has already terrorized the Grizzlies, putting up two goals and two assists in his Oilers debut.

These questions will begin to be answered as early as Friday, April 22 at 8:10 CT. Round one, game one is coming soon and the Oilers have a chance to lift the ultimate prize, the Kelly Cup. Under the leadership of head coach Rob Murray, the Oilers have made it to the playoffs twice and were on pace to make it three times if it weren’t for the canceled postseason in 2019-20. The previous run was a special one, and the next has just arrived. Coach Murray has taken this team to new heights this season, what will round one bring?

The Oilers will open the playoffs Friday, April 22 at 8:10 CT in West Valley City, Utah. Tune in on FloSports and on Mixlr via tulsaoilers.com.